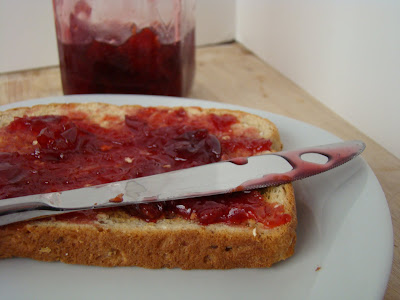 In case you haven't noticed, sour cherry season (or, as I think of it, most awesome fruit to bake with EVER season)is lamentably short. They're still available at the markets here in Chicagoland, but if I were a betting woman, I'd bet they won't be around for more than another week or two. If you've never worked with sour cherries, get thee to thy local market pronto and buy some. That sweet cherry pie you usually make will absolutely sing if you swap sour cherries for the bings.


1. Buy as many cherries as you feel like pitting. Figure one pound of cherries will make one good-sized jar of jam. Plump, dark Bing cherries work really well, although Burlats are good, and if you can find sour cherries, your jam will rock.

2. Wear something red. Rinse the cherries, remove the stems, and pit the cherries. Make sure to remove all the pits. Chop about ¾ of them into smaller pieces, but not too small. Leave some cherries whole so people can see later on how hard you worked pitting real cherries. If you leave too many whole ones, they'll tumble off your toast.

3. Cook the cherries in a large non-reactive stockpot. It should be pretty big since the juices bubble up. Add the zest and juice of one or two fresh lemons. Lemon juice adds pectin as well as acidity, and will help the jam gel later on.

4. Cook the cherries, stirring once in a while with a heatproof spatula, until they're wilted and completely soft, which may take about 20 minutes, depending on how much heat you give them.

5. Once they're cooked, measure out how many cherries you have (including the juice.) Use 3/4 of the amount of sugar. For example if you have 4 cups of cooked cherry matter, add 3 cups of sugar. It may seem like a lot, but that amount of sugar is necessary to keep the jam from spoilage.

6. Stir the sugar and the cherries in the pot and cook over moderate-to-high heat. The best jam is cooked quickly. While it's cooking, put a small white plate in the freezer. Remain vigilant and stir the fruit often with a heatproof utensil. (Wouldn't it be a shame to burn it at this point?) Scrape the bottom of the pot as you stir as well.

7. Once the bubbles subside and the jam appears a bit thick and looks like it is beginning to gel, (it will coat the spatula in a clear, thick-ish, jelly-like layer, but not too thick) turn off the heat and put a small amount of jam on the frozen plate and return to the freezer. After a few minutes, when you nudge it if it wrinkles, it's done.

If not, cook it some more, turn off the heat, and test it again. If you overcook your jam, the sugar will caramelize and it won't taste good and there's nothing you can do. Better to undercook it, test it, then cook it some more.

Once it's done and gelled, add a bit of kirsch if you have it, clear cherry eau-de-vie which will highlight the flavor. Or add a few drops of almond extract, but not too much, or it will taste like a cheap Italian cake. Ladle the warm jam into clean jars and cover. Cool at room temperature, then put in the refrigerator where it will keep for several months.
Posted by nicole at 6:43 AM