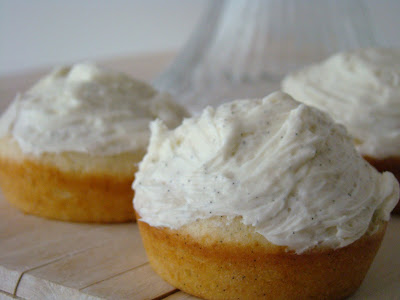 Why does vanilla have such a poor reputation? People will often refer to the boring and mundane as "just vanilla," which leaves me with the distinct impression that these naysayers have never had anything outside the realm of artificial vanilla extract. Pure vanilla, REAL vanilla, with its over 150 aromatic and flavor compounds (versus the artificial stuff's whopping 1), is anything but boring. The bean deserves respect. 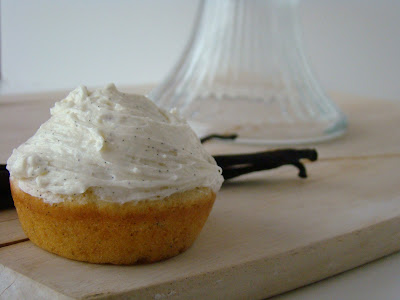 These cupcakes are anything but boring, and they don't include any ingredients that push the vanilla bean off its well-deserved pedestal. The cupcake flavor is perfect, leaving me with no desire to change it, thought I do want to experiment with the texture a wee bit by adjusting the recipe to use cake flour instead of all-purpose, and by whipping the egg whites and folding them into the batter to make a lighter cake. Change or no change, this recipe will probably make a regular appearance in my kitchen. 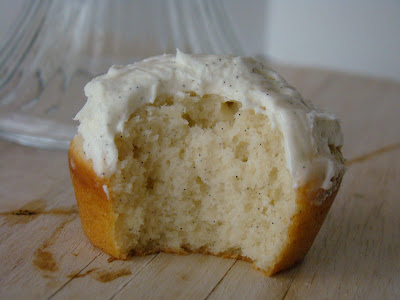 1. Preheat oven to 350 degrees F. While the oven preheats cut open and scrape out the seeds of a vanilla bean. Place the seeds, empty bean, and the milk into a small saucepan. Heat to just under a simmer for a few minutes being careful not to scald the milk. Remove from heat and allow the milk to steep and cool. (Be sure to remove the bean after it cools. Wash it and then place it out to dry so it can be used again.)

3. In one bowl sift together the flour, baking powder, and salt. In another whisk together the vanilla steeped milk, vanilla extract, and sour cream.

4. Add the flour mixture and the milk mixture to the butter sugar egg mixture in alternating additions (dry-wet-dry method), starting and ending with the flour. Mix until just combined being sure to not overbeat.

5. Divide the batter into cupcake papers in a muffin tin and bake at 350F for 18-20 minutes or until slightly golden brown. Be sure to rotate the cupcakes after the first 15 minutes to ensure even baking. Be sure to keep a close eye as these can get overbaked quickly. Allow to cool on a wire rack. Frost when cooled.

Beat the butter and slowly add in the powdered sugar. Scrape the seeds out of the vanilla bean and beat in.


Makes about 1 dozen cupcakes (I managed closer to 20 small cupcakes)
Posted by nicole at 2:41 PM