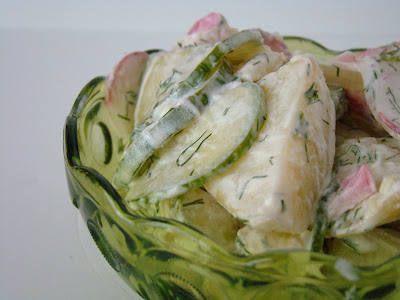 Maybe I'm jumping the gun, but I can't wait for spring to get here. I woke up the other day with a wicked craving for something grilled, some watermelon, and potato salad. I even contemplated making some southern style sweet tea, which I'm pretty sure I can chalk up to pregnancy cravings since I've never in my life wanted to drink something that sweet. In an attempt to assimilate with these crazy cold-weather notherners, I planned to fire up the grill and make a completely unseasonal summertime meal; however, my feelings changed the second it started sleeting outside. Fortunately, by that point, the only thing I was still craving was potato salad, and fortunately, I made some. 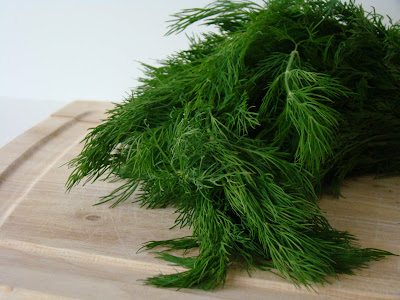 I've been told I'm too picky when it comes to potato salad, but I just don't have much appreciation for a flatly-flavored, mushy potatoes loaded down with mayo. It's kind of gross, really. This salad, though, has just enough mayo to bind everything together, plenty of radishes and pickled cucumbers (I'll get back to those in a minute) to provide a welcome burst of crunch, and a hearty dose of dill to keep the flavor bright. It's my new favorite potato salad. 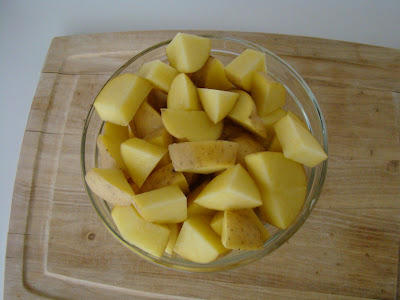 I would urge you to make an extra batch of the pickled cucumbers. I ended up eating so many of them from the bowl while they were pickling, I wasn't sure that I would have enough for the salad. They're delicious, addictive, and they're so easy to make, I can't think of a reason to not have them in my refrigerator at all times for salads and sandwiches.

2. Pour cucumber mixture into large sieve set over bowl. Drain at least 1 hour and up to 3 hours. Discard brine.

Mound salad in bowl. Serve cold or at room temperature.
Posted by nicole at 10:24 AM