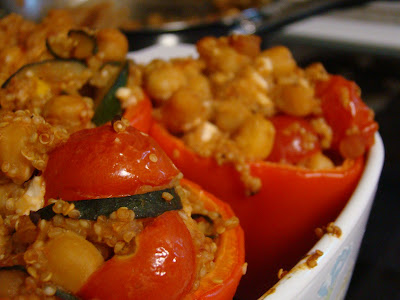 Or rather, stuffing that you can use to stuff red peppers but is just as good (or better) eaten alone. This has quickly become my favorite dinner staple for a busy weeknight, though Mr. Milk and Honey prefers to eat it as a side dish when we have leftover meat of some sort, because for him, veggies and grain alone doth not a meal make. Though we may not agree about what role this dish should have on our dinner plate, we both enjoy the combination of fennel, zucchini, chickpeas, and tomato, and we love how the feta cheese lends itself to a wonderfully creamy texture in which the little bits of quinoa shine. The best part? It makes fantastic leftovers for lunch, and if you're like me, you'll find yourself looking forward to busy weeknights just so you'll have an excuse to make it again. 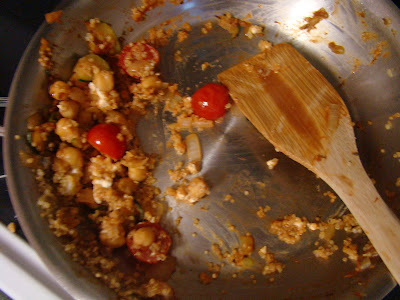 The original recipe calls for couscous, but I usually have quinoa on hand. Either grain works well.

2. Bring the broth to a boil in a saucepan, add the couscous, cover the pan and remove it from the heat. Meanwhile, bring a large pot of water to a boil. Cut the stems and top half inch off the bell peppers and scoop out the seeds and membranes. Boil trimmed peppers for 5 minutes, then drain them upside down*.

3. Heat oil in a nonstick skillet. Add onion, zucchini, yellow squash, fennel seeds, oregano, and salt. Cook, stirring frequently, for 5 minutes or until vegetables are softened. Remove from heat and stir in the tomatoes and chickpeas. Using a fork, scrape the couscous into the skillet and toss with the vegetables. Stir in the crumbled feta. Place peppers upright in the baking dish and fill them with couscous. Bake 15 minutes. Serve immediately.

* Instead of boiling, I prefer to roast my peppers in the oven for about 15 minutes before stuffing and baking them.
Posted by nicole at 12:53 PM