It's turning out to be one of those weeks. I don't have time to give much explanation, but between being hooked up to an ancient portable EKG like a lab rat for the last couple of days and our ever-increasing desire to be closer to friends and family (or to at least live somewhere that they'd actually want to visit), I am having to remind myself more than usual to just be content. Due to my wired-up state, I haven't been able to do much in the way of cooking, so I'll share with you my most recent culinary disaster- because it's just that kind of day.

I decided to do something out of the ordinary and turn to the archives at foodnetwork.com. Lest you think I'm about to go on the tired old rant about sell-out celebrity chefs and how they've ruined the food world, I'm not. Most of their celebrity chefs are quite talented and well-trained in their respective fields, and generalizing all of them into one lump category is beyond disrespectful; however, a handful of them do pander toward... how can I put this nicely... the lowest common denominator (has anyone ever seen Sandra Lee and her infamous Kwanzaa Cake??), and I struggle to trust a network that would put the Sandra Lees of the food world right up there with the Ina Gartens. It's culinary sacrilege. I've also found that many of the recipes on the website are inaccurate when compared with how the chef prepared that particular dish on their show, so unless you've watched the corresponding show, it's hard to know if you're getting the correct recipe or not. But I digress... I needed jambalaya guidance, and in a moment of weakness, I took a chance on the food network.

Unfortunately, this particular recipe didn't wow the hubs and me. It wasn't horrible, but I am kinda bummed that I used all of my andouille and a good chunk of my fresh shrimp for this. Ok, more than bummed- I'm downright sad. I only get goodies like that when we travel (because really, where am I going to find fresh shrimp in the middle of Kansas?), and it's going to be another month before we escape the state again. The amount of salt in the recipe made it taste like a boxed jambalaya mixture, and the spice ratio seemed wrong, overbearing enough that we could barely taste any of the other ingredients, including my prized fresh shrimp and my wonderful andouille. I had reservations about the whole dish when the spice mixture recipe read like an advertisement, but I was already committed at that point. *Sigh.* Why didn't I just find a fellow food blogger with a peer-tested recipe? Why didn't I just put in the extra ten minutes to find a recipe that didn't have me questioning it from the beginning? Because, I am human, and I err... and this time, I erred big. 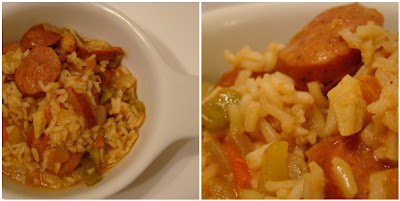 In a bowl combine shrimp, chicken and Creole seasoning, and work in seasoning well. In a large saucepan heat oil over high heat with onion, pepper and celery, 3 minutes. Add garlic, tomatoes, bay leaves, Worcestershire and hot sauces. Stir in rice and slowly add broth. Reduce heat to medium and cook until rice absorbs liquid and becomes tender, stirring occasionally, about 15 minutes. When rice is just tender add shrimp and chicken mixture and sausage. Cook until meat is done, about 10 minutes more. Season to taste with salt, pepper and Creole seasoning.

*NOTE: Reader comments suggested that this turned out too soupy, so I doubled the veggies and added a tiny bit of extra rice.