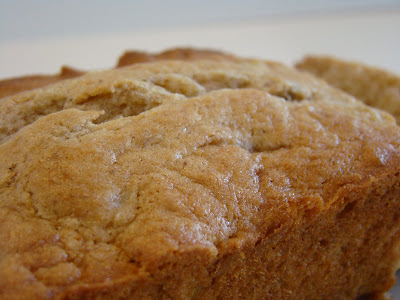 I must preface this post with an apology to my mother, because I feel I have just betrayed her in some small way. For my whole life, I've been a staunch loyalist to her banana bread. I've tried dozens of other banana breads that were always too dry and usually pretty flat in the flavor department, and as much as I wanted to like them, they always fell short of my mom's recipe. She set the bar pretty darn high, and nothing I have tried has come close... until now. You see, I've never created a quickbread recipe from out of nowhere, but I had these nearly black bananas that needed to be used, and I had this sour cream, and this bottle of rum that had barely anything left in it, and new stoneware mini loaf pans just begging to be used, and I had to do SOMETHING about it. I felt confident enough in my improvisational baking skills to be able to just throw together a decent banana bread, but I swear I didn't think it would be THAT great... and oh, was I wrong. It's great. It's sweeter than my mom's recipe, almost more of a dessert bread than her breakfast bread, and it's ever-so-slightly more moist. A splash of rum gives it a nice bananas foster-ish feel, and the nutmeg, cinnamon, and cloves add a nice autumnal touch (not exactly springtime flavors, I realize, but they could probably be scaled back or swapped out for whatever you'd like). I'll probably use a bit less sugar next time and maybe throw in some toasted pecans, but it's fantastic as is. I'm sorry, Mom. I still absolutely adore your banana bread, but I'll be using this recipe just as often as I use yours. 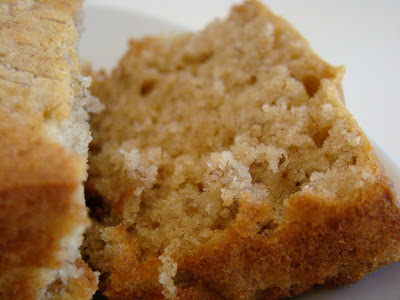 1. Preheat oven to 350 degrees and lightly butter 4 mini loaf pans* (or whatever size you want to use. I like my minis).

2. In stand mixer fitted with paddle attachment, cream butter and sugars together until light and fluffy (should take about 4 minutes). Add eggs one at a time, beating after each addition just until incorporated. Add vanilla and rum.

3. While creaming butter and sugar, mash bananas together with sour cream in a small bowl and sift together dry flour, powder, soda, salt, cinnamon, nutmeg, and cloves in another bowl.

4. Add 1/2 of flour mixture to creamed butter mixture and beat just until incorporated. Add banana mixture, then add the rest of the flour and beat until just incorporated.

5. Pour into prepared pans and bake for 25 minutes (for minis) or until knife inserted in center comes out clean.

*I used stoneware pans. If you're using dark pans, you may want to reduce your oven temperature to 325 degrees.
Posted by nicole at 11:15 AM