Let's travel back in time for a bit, shall we? Last weekend, Yves and I spent the day outside and enjoyed a balmy, 80 degree Saturday tilling the garden in preparation for this weekend, which was supposed to be spent planting in the garden. I had visions of tomatoes, melons, berries, and herbs, and all of the bountiful promise they entailed dancing through my head. Fast forward to today: Mother Nature has had a major mood swing. It's 21 degrees out and falling, and we're in the middle of a blizzard. My dreams of sun, earthworms, soil, and seeds have been utterly dashed; in fact, I can't even see my garden area through the blowing snow. Go figure... But hey, I'm adaptable. Miss Nature can throw all the sleet, freezing rain, snow, and blustery winds she wants my way- it just gives me a perfect reason to throw on a pot of stew and have a quiet, snowed-in evening with the hubs. How romantic is that? 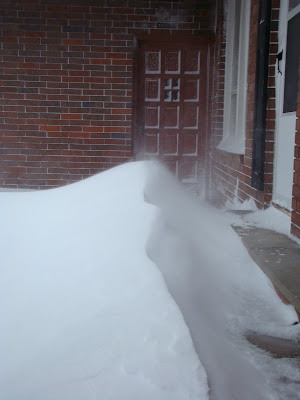 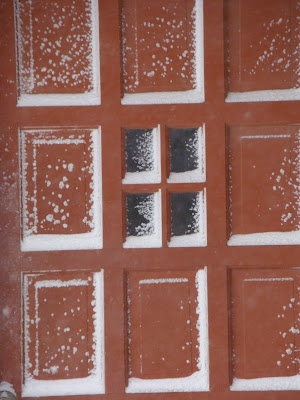 I found this recipe over at simplyrecipes.com. I've made it several times, once following the recipe and then making several substitutions (not that the original isn't good-it's great- but I always play around with soups and stews). I love this stew because it involves lamb and the broth is mostly wine. Really, I should stop there, because that's reason enough to try it, but lest you need more convincing, this recipe is quite versatile and can take a lot of experimentation without losing its integrity. This time around, I used beef instead of lamb because I didn't have any lamb on hand, and I get my lamb from a farm that isn't exactly accessible during blizzards. But if you're not snowbound, get thee to your local grocer/farmer/field full of sheep and get some lamb. I also didn't have any roasted red peppers, but I made up for it by making a few other alterations and switched things up a bit- thyme instead of rosemary, beef stock instead of chicken stock, regular paprika instead of sweet, and I threw in some chunks of sweet potatoes (not yams)... which, I realize, completely changes the flavor profile, but hey, this is my blog and I can do what I want, and it was delicious. Whether you follow the recipe or just use it as a guideline, this recipe is worth keeping in your back pocket for a snowy day. 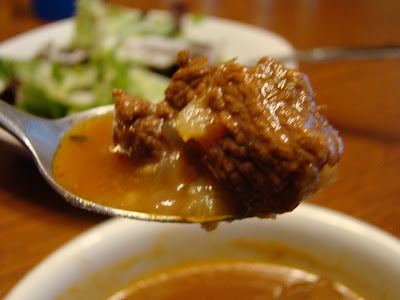 2 Heat olive oil in a large, heavy-bottomed pan with lid, over medium-high heat. Working in batches, brown the meat on all sides, about 10 minutes per batch. Return all meat to the pot. Add onions, minced garlic, and salt and pepper to taste, and cook, scraping browned bits stuck to the bottom of the pot with a wooden spoon, until the onions are soft, about 5 minutes. Stir in paprika, add roasted peppers, tomatoes, parsley, bay leaf, and red wine. Bring to a boil, reduce heat to medium, and simmer until juices in pot reduce and thicken slightly, about 10-15 minutes. 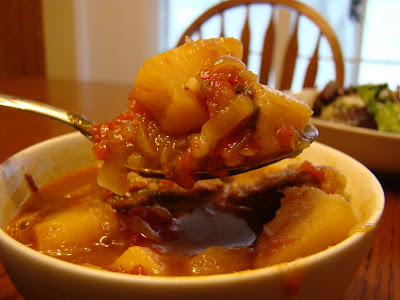